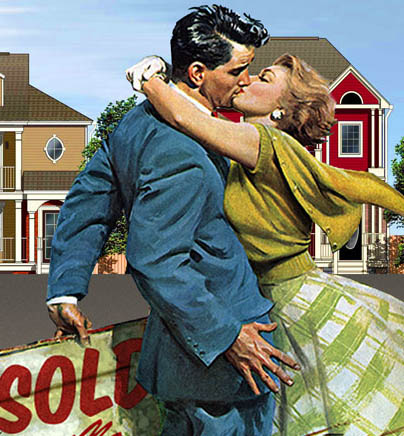 Here’s the hard truth: Any Western woman that you happen to meet today is going to be infected with at least some feminist philosophy. Some men think that this makes a happy marriage impossible, but it is possible to undo the bad effects of feminism. Here is how to do it.

Feminism is a philosophy that men and women are equal in all things. Yes, it admits that there are some biological differences in that women are able to bear children, but according to feminism, the differences stop there. In practice, feminism has caused men and women to view each other with suspicion, almost as if we are enemies.

First wave feminism lobbied for women to have the same legal rights as men such as giving women the right to vote. Modern feminism goes much further. In its moderate form, it tells women that they can be self-actualized only by working outside the home. That being a wife and mother is secondary to a woman’s career, even if that career amounts to nothing more than slaving away in a cubicle.

In its more extreme forms, feminism has an undercurrent of hatred for men. It views all male/female relationships in terms of power. It teaches women that if they submit to their husband in even small things, they lose power. Men, by their very existence, are oppressors of women.

Your wife (or your future wife) is already a feminist

Here’s the bad news: All modern women have received feminist indoctrination. The spread of the feminist message is pervasive. It is taught through schools, books, television shows, movies, and magazines. It is even taught in our churches. For example, a Catholic priest tweeted out the following image. You can be sure that he is preaching feminism from the pulpit. 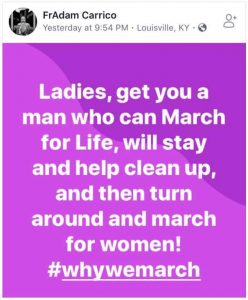 What this means is that all women are feminist to one degree or another. Even devout Christian girls still have traces of it. And while most women have enough common sense to reject the outright hatred of men that characterizes the extreme forms of feminism, it is still something that every woman has programmed into her by the culture.

I’ll give myself as an example. My wife was raised in a fairly traditional family with strong values. She is a lifetime product of Catholic private schools. She even earned her Bachelor’s and Master’s degree at Catholic universities. Even with this upbringing she felt compelled to have a career and her “own life” apart from me. This kind of separateness is the opposite of what it means to become “one flesh” in marriage.

Here are some of the things that I did to change the situation. I believe they will work for you as well. But before that, here are two caveats:

Undoing decades of feminist indoctrination is not going to be easy or fast. This is going to take some hard work and patience on your part. And this is not going to happen overnight. Think in terms of months or, in the worst case, even years.

Caveat #2: This is going to make your wife happier

It is important to say this as it is certain that SJWs will attack me for this article: Removing feminist indoctrination is going to make your wife’s life better and happier. It is not intended to oppress your wife. Rejecting feminism does not mean that the husband becomes some sort of oriental despot. I talk more about healthy masculine/feminine dynamics in my book, Staying Married in a Degenerate Age, but the short story is that the best way to think of this is that the husband is king and his wife is queen.

For my own wife, taking these steps has really unleashed her creative and entrepreneurial energies. But the best part is that it has saved our marriage.

1. Stop being a feminist yourself

It is not only women who are indoctrinated into feminism. Men are as well. For example, some men want women to ask them out on dates or to initiate sex. Courtship is a complex interplay between a man and a woman, but the initiative always lies with the man. Some modern men like feminism because it takes the initiative away and gives it to the woman.

You can’t have your cake and eat it too. You can’t keep some bits of feminism and eliminate only the pieces you don’t like. If you want your woman to stop being a feminist, you will have to uproot feminism from your own mind first.

The only woman on earth who felt truly sorry for your woes was your mother. Your wife doesn’t want to feel sorry for you. She wants you to get up and tackle problems. If you are suffering, don’t complain. Instead, do what you can to fix it. If you can’t fix it, keep your suffering to yourself. See yourself as a general who is leading an army. You are always responsible for keeping up the morale of your troops.

Feminists teach that there must be perfect equality in a marriage. Men and women are supposed to come to an agreement on everything. If they can’t agree, they are to just go about their lives separately. I found in my own marriage that women hate to have an equal say on everything. They want their man to be decisive. That doesn’t mean you don’t take your wife’s input, it is just that you make the final decision.

There is no such thing as an absentee leader. To be a leader you must engage. You can delegate certain decisions but, as the king of your realm, you are still responsible for everything. If your wife asks for your thoughts on decorating the house or how to educate your children, don’t abdicate. Engage, understand the issue, and make a decision!

Part of the feminist narrative is that women have the worse end of the stick. Men supposedly have it easy. If you want to reverse this dynamic, you are going to have to lead by example. Outwork your wife and, where possible, make her burden lighter.

5. Give your wife children

A man’s natural role is to be a husband and father. A woman’s natural role is to be a wife and mother. Bringing a child into this world radically re-orients our lives in a more traditional direction. By itself, it does not eliminate feminist indoctrination but any woman who is a mother knows that there are things that are more important than becoming the next Facebook executive.

Having children is not possible for everyone, but if you and your wife are able, I recommend it.

6. Let your wife be a stay at home mom

It is the man’s job to provide. It is the woman’s job to nurture her family. Of course, this is possible with a woman working 40 hours per week, it makes it more difficult. The woman’s loyalties are divided. She must please her boss in addition to being a wife to her husband and mother to her children.

Deciding to have my wife stay home to raise our children was key to creating a clean break with feminist ideology. It helped to make us more of a team as we are radically reliant upon each other. We are not two ships making a journey, we are both aboard the same ship.

Again, this is not easy and not everyone is going to be able to achieve this financially, but it is good to set it as a goal.

Notice that at no point did I recommend that you ask your wife to read anything or that you try to convince her that feminism is bad. That’s because I don’t think it is possible to undo the programming through rational argument. Instead, the way to develop wholesome relationships is to re-impose the natural order. When a man assumes his natural role as leader, the wife will naturally follow. Indoctrination cannot trump nature forever. Take the lead. Nature will take its course.

If you have enjoyed this post, please share it on social media. Also, if you support the work of bringing back traditional masculinity, please consider a pledge to my Patreon. Thank you for reading!

Read More: How to Become an Alpha Male