It is plain to the unbiased observer that liberal Western societies are in trouble. Low birth rates, unsustainable welfare states, loss of faith, and growing lack of cohesion all point to a reckoning in the not so distant future.

This fact has gotten a lot of people thinking about how we got into such a state in the first place. If we are going to rebuild society, we want to make sure we avoid making that mistake again. We will want to start with a solid foundation.

However, a key piece of the foundation of modern Western culture is Christianity, which raises the question: Did Christianity contribute to the decline? Does Christianity lead to liberalism?

A recent article in the Radix Journal addresses that question. In his piece entitled The Moral Disarmament of the White Race, author Henry Köselitz talks about the need to set up a mythic framework upon which artists can build to communicate “emotional truth” to the masses. The mythic framework that we have today came from Christianity.

But, Köselitz writes, the current mythic framework is what gave us progressivism:

The mythic framework of the West is a product of Christianity. Christianity became the dominant religion in the West when it became the state religion of Rome during 380 A.D, a position which it held until mid 18th century, when it was superseded by liberalism, the current dominant ideology. This did not entail a rejection of Christianity, rather, liberalism evolved from Christianity; fundamentally, it is Christian morality secularized.

Liberalism, according to Köselitz, merely took ideas that were inherent in Christianity and took them to their logical conclusion. He quotes the following passages from Jesus and St. Paul:

Blessed are the meek: for they shall inherit the earth (Matthew 5:5).

For Köselitz, it was only natural that Christianity, which teaches “the brotherhood of man, humility, the centrality of the individual, and holds that the possession of truth is the key to salvation” would lead our current liberal ideology that “advocates a morality of universalism, egalitarianism, and individualism founded upon a claimed devotion to scientific truth.”

One of the problems with this liberal ideology is that it views human beings as solely economic units—culture doesn’t matter. This has led to the unchecked third world immigration that we are seeing today both in the United States and Europe. Thus, “the cultural, political, and religious elites in the West support policies that lead to the destruction of their nations, communities, and race.”

The implication of the article is that if we are going to rebuild society, we need to start with a different religion that will provide a healthier mythic framework. This healthier framework:

[C]elebrates elitism rather than equality, which is particular to Europeans rather than universalist, which provides a place and meaning for the individual within the community, rather than conceiving of man as a social atom, and is self affirmative rather masochistic.

This is why “conservatives” are always against the ropes, especially when it comes to racial identity. You can see it in the way they are able to affirm that “black pride” is good, but they categorically reject “white pride.” You can see it in their complete inability to reject the idea that millions of Muslim immigrants are not a good fit with European society.

I think that Köselitz is correct in his diagnosis. Liberalism, whether it exists in its current form or in its older, classical form is a defective philosophy. He is also correct that Christianity provided the soil from which this philosophy sprang. The real question, though, is did liberalism come from a healthy Christianity, or a compromised form?

To learn the teachings of Christianity, it is not sufficient to simply read the Bible. The Bible has always been part of the Christian community, and it is necessary to observe how the teachings of the Bible were understood and lived by that community—the Catholic Church.

The civilization that organically grew from Catholic teaching is diametrically opposed to our modern liberal culture. Whereas modern society is egalitarian, feminist, and democratic, traditional Catholic cultures were hierarchical, patriarchal, and monarchical.

When Catholic society was in full bloom, society was divided into three primary layers: those who pray (priests), those who fight (nobles), and those who work (peasants). Each group had its particular role to play. The rulers, who were part of the nobility, were not parasites on the people they ruled, they served a fatherly function of protecting their people.

The Catholic society of the Middle Ages was not pacifist. It was the age when the Germanic pagan warrior traditions were united to Christian teaching to create chivalry. The history of the Crusades testifies to the fact that when these Christian knights were united under good leadership, they ranked among the best fighting forces of history.

If a fleet of boats carrying thousands of Muslim men had landed upon the shores of Medieval Europe, it is very unlikely that they would have been greeted with four star accommodations, a comfortable salary for two years, and a generous dental plan. Instead, they probably would have been viewed as an invading force and slaughtered soon after they disembarked.

But what about the passages that Köselitz quoted? Don’t they prove that Christianity is hopelessly egalitarian and weak?

The passage from Galatians where Paul says, “all are one in Jesus Christ” does not mean that people are equal in every way. If it did, all of Catholic society was in flagrant violation of this verse. In context, Paul is saying that God does not play favorites. God does not favor Jewish Christians over Gentile Christians. In God’s eyes, they are equal. It doesn’t imply that democracy is better than monarchy, that there is no such thing as an aristocracy, or that women can be priests.

This verse also doesn’t imply that all cultures or races will eventually be obliterated into a multicultural mush, rather, as the Catholic monk Cui Pertinebit points out in the comments to the article, Paul is “warning the Christians in Galatia NOT to give up their ethnic identity to embrace Jewish identity and customs.”

The Church has always recognized that cultural, racial, and gender differences as good things. Even the ideal of chivalry is testimony to this fact. The Church did not obliterate the Germanic pagan warrior traditions, rather it preserved and elevated these traditions to an even greater honor.

Similarly, the passages on humility do not mean that a Christian must also be a “cuckservative” who allows his own family, culture, and race to be destroyed in deference to others. True humility is simply the recognition of where we stand in relation to God. It does not preclude us from acting decisively and ferociously when the situation demands. What C.S. Lewis says this about the ideal knight sheds light on this paradox of humility:

The knight is a man of blood and iron, a man familiar with the sight of smashed faces and the ragged stumps of lopped-off limbs; he is also a demure, almost a maidenlike, guest in the hall, a gentle, modest, unobtrusive man. He is not a compromise or a happy mean between ferocity and meekness; he is fierce to the nth and meek to the nth.

Where does liberalism come from? 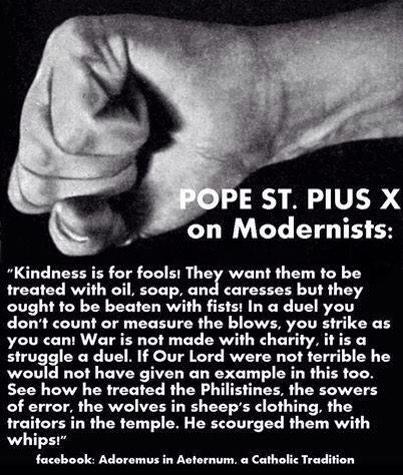 Liberalism is the result of a similar process. The liberal takes the Christian doctrine of equality before God and perverts it to mean that all people are literally equal—an idea that is obviously incorrect.

Ultimately, then, liberalism is a modern heresy that needs to be stamped out. However, it is not a necessary heresy. There is nothing in Christianity that inexorably impels it toward liberalism. If it did, we would have expected to see liberalism earlier in Christianity’s history, but it only begins to show up in the late 18th century.

It is true that the mythic framework of modern society is highly defective and needs to be replaced if we are to rebuild civilization. But the answer is not a return to a European paganism that only exists as a scholarly reconstruction based on ancient Christian documents. Instead, we must return to our authentic Catholic foundation. The sooner we get to work on that, the sooner we can begin to rebuild the ruins of our civilization.