A lot of manosphere blogs advise men not to get married. They argue that women, especially Western women, are so poisoned by feminist and progressive propaganda, that they are no longer suitable to be wives and mothers. Instead, these bloggers recommend that men resign themselves to lives full of meaningless sex with lots of women.

They have some good reasons for making this recommendation. Thanks to feminism, young girls are taught that being a wife and mother are bad things. But achievement in the workplace is self-actualizing. Promiscuity is promoted as something “empowering.” Faith in God, on the other hand, is treated as something backward and unscientific.

Society’s message for married women is no better. Popular culture states that divorce is empowering. The Huffington Post boasts a section devoted entirely to divorce and Bravo recently launched a scripted series called Girlfriends’ Guide to Divorce. In many television shows on the topic, female characters inevitably upgrade after divorcing their husbands because we all know that there is nothing that rich, athletic young men want more than a yoga-pant wearing, pinot grigio sipping divorcee who is pushing 40. Plenty of decent men end up getting slapped with a divorce simply because their wives are bored.

But it is not just boredom. Our legal system is also stacked against men. Men are typically the higher earning partner in a marriage so they are more likely to pay alimony. If there are children, the mother usually gets custody, and therefore child support payments, even if she was the party at fault.

Despite this bleak environment, I still recommend that men get married. Marriage is the fundamental institution of civilization. Without marriage, there is no civilization. It is as old as humanity itself. It is your birthright.

If you are the type of man who wants to throw in the towel in the face of adversity, this post is not for you. But if you are willing to swim against the current, read on because in this series, I am going to give you everything you need to know about how to find a wife.

The first step to successfully find a suitable wife is to realize that there are good women out there. Take heart!

Step 2 – Work on Yourself

In the past, it was possible for the average guy to find a good woman, get married, have children, and stay married with the same woman until he died. Those days are gone. If you want to have a successful marriage today, you can’t just be average. You are going to have to be exceptional.

To become exceptional, develop yourself in the following areas:

Fitness. If you want to get married and stay married, resolve now to get into good physical condition. You have to look good. Men and women find certain proportions attractive. For example, scientific research indicates that a 0.7 waist-hip ratio in women is universally considered attractive.

These proportions are not created by the fashion industry. They are built into our genes. Good proportions signal good health and good reproductive ability. When feminists tell us that we need to find overweight women attractive, they are not fighting society’s norms, the are going against biology.

The research also indicates that men and women are very good at making quick determinations as to who has the right physical qualifications. You don’t need to look at a girl for hours to determine whether or not she is attractive. All you need is a split second glance.

Given that women are making the same split second judgments about men, it makes sense that men try to optimize their body shape to be attractive. The advent of Tinder makes it even more important that you look your best to ensure that women “swipe right” on you.

The good news is that you can do a great deal to alter your body shape. 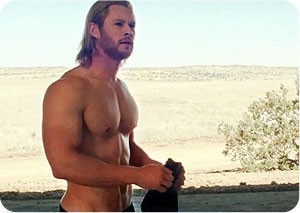 Let’s be very clear though. I am not saying that you need to develop a body like Chris Hemsworth’s in Thor. Most guys, including myself, are not blessed with those genetics. You just need to be the best that you can be.

To transform your body, you will need to do two things: Lose Weight and Lift Weights.

In his excellent book, Evolution: The Cutting Edge Guide to Breaking Down Mental Walls and Building the Body You’ve Always Wanted, actor Joe Manganiello talks about the importance of having a great body in making a good first impression.

After graduating from Carnegie Mellon’s prestigious acting program, he had to audition before agents and casting directors in LA. He writes:

You have three minutes onstage to make an impression. Three minutes to sum up four years of comprehensive classical theater training in some of the greatest material ever written… unfortunately none of which is appropriate to use in front of the agents… I had just spent four years being trained in classical material by some of the best acting teachers in the world, and no one in Los Angeles was going to give a shit about any of it.

Manganiello thought about how he could make hiring him a no-brainer:

If the goal was to separate myself from the herd in three short minutes, I wanted to do that as soon as I walked out onstage. I wanted them to reach for their pens to check the box to set up a meeting with me before I even opened my mouth.

He decided to build a physique that would draw attention as soon as he entered a room. It worked. He landed a breakthrough role in HBO’s True Blood series, and that was the beginning of a great acting career.

Building a great physique helped Manganiello make a good first impression and it will do the same for you.

If you want a program that will get you completely jacked, I recommend Manganiello’s book. But there are lots of other programs floating around the internet that will also do the job. They key is to be consistent with whatever program you select.

How long will it take? It depends on your current condition. Experts say that losing weight at a rate of one to two pounds a week is the most prudent path to fitness. As for weight training, you should start to see positive changes in your body after only four weeks of consistent training. That doesn’t mean you will look like Manganiello, but you will see some subtle improvements.

Dress the part. Another thing that you can do to improve your appearance is to dress well. That doesn’t mean that you wear an Armani suit to your college biology class. That would make you look like a dipshit. Rather, just dress a little bit better than your peers.

For example, if everyone is wearing sweatpants (always a bad choice unless you are actually participating in an athletic event), wear jeans or khakis. If you work in an IT shop, forego the khaki pants and opt for real slacks, a button down shirt, and lace up shoes. Remember that a sport coat can make almost any outfit look a bit more sophisticated.

Pursue your own mission. In his book The Way of the Superior Man, author David Deida stresses that a man needs to have his own purpose that is completely separate from that of his wife or girlfriend. Your mission in life is your deepest desire, and you should align your life to achieve your purpose.

Women can sense if a man has no mission. A man with no mission can fool a girl for a while, but she will eventually see through him.

Achieve. If you are looking for a girl who is wife material, you are going to have to strive to achieve things in life. Achievement is what men are all about. It is their duty.

A high quality woman will want a husband who will be good provider to her and her children. If you don’t have any achievement to demonstrate your ability to provide, it is going to be difficult to hold the attention for any length of time.

By achievements, I mean any accomplishment that is going to make you a better provider. This means that you should especially focus on achievements that are going to enhance your financial bottom line. Start a business. Write a book. Learn a new programming language. If you are in school, get good grades.

Plan to continue to achieve things for the rest of your life. Don’t ever coast. The temptation is that once you’ve reached a certain level of success, you can just ease off at work and spend your free time pursuing cool hobbies. It is just not possible to coast in this economy. If I am correct, the economy will be even more unforgiving in the future. You’ve been warned: Don’t Coast!

Travel light. There was a time when most people moved on from their past relationships. No more. Social media has made this virtually impossible. Now, people continue to keep all their old flames as “friends” because it would be “mean” not to do so.

Get used to rejection. I have a friend who is a multi-millionaire. He started an incredibly lucrative business in his early twenties. He is tall, handsome, and athletic. He also has strong values—he is a devout Catholic. Despite all his achievements, he is genuinely down to earth. He exudes a quiet confidence that is devoid of any false bravado.

This friend, who has so much going for him, got rejected by women—a lot. One girl, who had rejected him in a humiliating way, later found out that he was wealthy. The size of his wallet altered her opinion of him and she had the audacity to try to get back on his good side. She failed, of course.

Today, my friend is happily married to a beautiful woman.

My point is that all guys get rejected. All guys get dumped. When you get rejected or dumped or cheated on, don’t dwell on it. Give yourself a day to recover and laugh it off. Don’t take it personally. Move on to the next girl.

Become cheerful. Nobody likes a depressed, negative sourpuss. Drop complaining and pessimistic thinking. Adopt a positive approach to life and be cheerful.

A lot of the information in self-help books and in the manosphere is dedicated to answering this question. The most common answer is to fake it. Act like you are confident alpha predator. Adopt an aloof attitude. Learn some snappy text game techniques.

Real confidence comes from achievement: being fit, being ambitious, living a life of action. That’s the approach we are taking here.

In Part II, I will discuss what to look for in a woman who will make a good wife.

Read How to Find a Wife Part II