Christianity and the traditional family are the two things that stand in the way of a complete victory for progressivism. Thus, progressives are doing everything in their power to stamp out or subvert both institutions. I recently saw a meme on Twitter that provides a good example of how our progressive elites are subverting Christianity to help it advance their agenda.

Progressives despise Christianity and the family. If they had their way, they would stamp both of them out.

Leftists tried to actually do this in Soviet Russia. At first they tried to discourage marriage, but they quickly had to reverse their position when they ended up with too many orphans and fatherless children on their hands.

The Marxist attempt to squash Christianity lasted a lot longer, but it was similarly unsuccessful.

Modern day leftists are more pragmatic. While they still plan on doing away with both institutions, they know this will take decades—perhaps over a century—to fully implement.

In the meantime, their strategy is to render both institutions ineffective through subversion. Here is an example of one of the ways they subvert the Christian message to serve their own purpose.

Who is the message aimed at?

I got the following meme on Twitter from a priest that I follow. As far as I can tell, he seems to be a solid priest so I am not accusing him of subversion. Rather, I think he tweeted it out thinking it was a very positive, uplifting message. 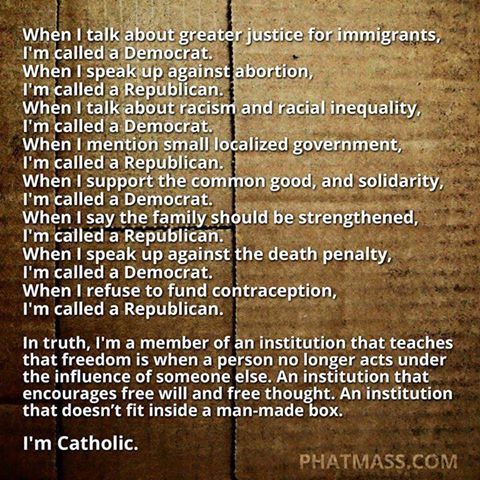 Whenever you see or hear a message, the first thing to ask is “who is this targeted at?” Is it meant to sway outsiders? Or is it meant to confirm the insiders?

In this case, it is pretty clear that this little meme is aimed at making Catholics feel good about being Catholic. The “I’m Catholic” is a dead give away that it is not trying to persuade outsiders that Catholicism is true. Its purpose is to make Catholics feel like they are free thinkers. They no longer act under the will of someone else. They are a little unpredictable. They don’t fit into any man-made box.

Nobody wants to be a conformist. Even the dullest, most conformist people on earth—leftist —  think they are part of a small, enlightened elite who carry a dangerous message that will usher in a utopian future.

I happen to agree with the statement that Catholics, and Christians, in general are a little less conformist than their secular peers. My only point is that the meme is targeted at influencing Catholics, not Protestants or other outsiders.

A lie is more believable if it is accompanied by some truth. The more truth that is included, the subtler the lie.

There happens to be a lot of truth in this meme so the lies contained therein are very subtle indeed. Let’s have a look.

The biggest error of the meme is that it creates an equivalence of the truths contained therein. For example, opposition to abortion and opposition to the death penalty are treated as equally Catholic positions.

But this is false. The Catholic Church has always opposed murder. After all, the Decalogue commands us “Thou shall not kill.”

However, the Church has never forbidden the death penalty—and despite what you may have heard the Church still does not forbid it. The Catechism says:

The traditional teaching of the Church does not exclude recourse to the death penalty, if this is the only possible way of effectively defending human lives against the unjust aggressor. (2267)

The Church can’t forbid the death penalty because the Bible explicitly approves of it. In the epistle to the Romans, St. Paul writes:

For the one in authority is God’s servant for your good. But if you do wrong, be afraid, for rulers do not bear the sword in vain. They are God’s servants, agents of wrath to bring punishment on the wrongdoer.

Paul was talking about the Roman authorities who had the power to use the sword to punish criminals.

Another false equivalence occurs with the mention of “greater justice for immigrants.”

Again, the Catholic Church has always supported justice for immigrants.

But the Church also teaches that prosperous nations are obliged to accept immigrants only to the extent they are able.

The Church also recognizes that political authorities can legitimately demand that immigrants behave in a certain way. Immigrants can be “subject to various juridical conditions, especially with regard to the immigrants’ duties toward their country of adoption. Immigrants are obliged to respect with gratitude the material and spiritual heritage of the country that receives them, to obey its laws and to assist in carrying civic burdens.”

The meme makes it sound like the only legitimate Catholic position is that prosperous nations should not put any limit on any immigration regardless of the reasons behind it.

Would giving immigrants welfare, free housing, and free medical care be “greater justice”? If you listen to leftists like George Soros, the answer is ‘yes.’

The true Catholic position is not as simplistic as the leftist position. It involves prudential judgment. It doesn’t mean that foreigners can immigrate for any reason. It also doesn’t mean that there are no expectations or burdens placed on immigrants.

The final subversive message in the meme is that Catholics must oppose “racism and racial inequality.”

What if the “inequality” is the result of hereditary differences in IQ?

Don’t blame the person who created the meme

Each of these cases involve prudential judgment, but they are frequently taught to be black and white issues like abortion.

Why are the bishops teaching these doctrines as all or nothing when they know that the teaching is much more nuanced?

I don’t know. Perhaps it is simply a way to win the applause of the world. Perhaps they can’t get out the full complexity of the teaching in our sound bite culture. Regardless of the reason, the failure of the bishop to fully explain these teachings exposes the Church to being used by Social Justice Warriors to achieve ends that are contrary to the mission of the Church.