There is a reality show that can change your life for the better.

Naked and Afraid is a reality show on The Discovery Channel that documents the struggles of two strangers, one man and one woman, who are stranded in a remote and inhospitable location. The goal is to make it through the 21-day challenge relying only on primitive survival skills. 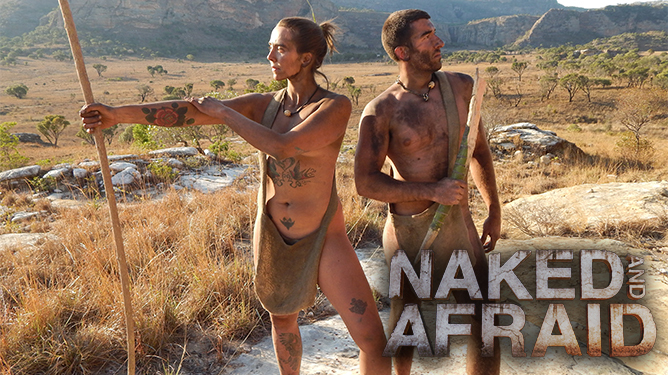 The contestants face extreme adversity ranging from hunger and thirst to hypothermia, sickness, sunburn, and a never-ending battle with insects and other pests. During the challenge, they must pick a suitable area to build shelter, find food and water, and build a fire, while dealing with the psychological and physical effects of starvation and exposure to the elements.

When my wife first told me about the show, I refused to watch. I thought it was just an excuse for the Discovery Channel to show tits and ass during prime time. But when I finally watched the show, I was surprised to find that it was one of the most informative programs on television. While most of the lessons involve survival, some are applicable to every day life. Here are some of the best lessons I have learned from Naked and Afraid:

If you want to be successful, you have to maintain a positive attitude. I had heard this a thousand times before, but never tried implementing it. I always fancied myself to be a “realist,” and felt that having a positive attitude in the face of adversity was somehow being disingenuous. I didn’t want to consider myself a Pollyanna. Besides, I know plenty of negative, miserable people who seem to have reasonably successful lives.

But watching Naked and Afraid changed how I think about the old adage “attitude is everything.” I watched capable survivalists succumb to negativity and invariably fail. In one show, a female survivalist ended up tapping out on day 19 simply because she was depressed and lonely. However other less experienced survivalists overcame the worst odds and completed the challenge with a positive attitude. Simply put, attitude did matter and in a very big way. It gave the successful contestants that extra edge that kept them going through the worst of times.

After watching a season of Naked and Afraid and seeing how much of a role attitude plays in success, my wife and I have chosen to be irrationally positive in the face of adversity, and it makes a noticeable difference in how we approach our problems. Simply thinking positive about difficult situations has opened the door to ideas and out of the box thinking that have helped us overcome numerous issues.

Most men are emotionally weaker than women. It pains me to write this but it is true. In countless episodes of Naked and Afraid, it is usually the male contestant who whines, pouts, and throws tantrums in response to challenging situations. And in most instances, without the encouragement and reassurance of their female companion, they would have fallen into depression and tapped out long before the 21-day mark. While there are some exceptions, the gender roles are clear. The successful contestants were the ones who were able to keep a harmonious male-female balance. The corollary to this lesson is: if you want to rise above the level of other men, check your whining at the door and face adversity head on.

Ancient man was not a vegetarian. Protein, protein, protein, seems to be the mantra on Naked and Afraid. Starving contestants are often heard extolling the life giving virtues of protein for survival. Several contestants liken a protein infusion to recharging a battery and claim to feel the nourishment pulsing through their veins. In short even the strongest vegan or vegetarian cannot subsist on coconuts and berries alone. Being a vegetarian might give you warm fuzzies, but it is only an option if you happen to live in an advanced civilization.

Get a fire starter. From watching Naked and Afraid, it is hard to decide what is more important, fire or water. Water is necessary for life, but without the fire to boil the water, contestants risk drinking contaminated water, which may do more damage than dehydration. The number one cause of sickness on Naked and Afraid comes from the survivalists who take a chance and drink water that has not been properly purified. Drinking untreated water usually causes simultaneous vomiting and diarrhea that can last for days. Some survivalists have even contracted diseases that will stay with them for the rest of their lives.

Fire is not just necessary to boil water. Without fire, one is susceptible to hypothermia, cannot cook food, and is at the mercy of bugs and other pests. Some of the survivalists have tapped out because of these factors.

I’ve always had this vague idea that if I needed to start a fire, I could just rub two sticks together or smash two rocks together to get sparks. This is big mistake. Starting a fire from scratch is immensely hard. Even the most seasoned survivalists work for days to get a fire started. Not every dried plant burns easily—some, especially in dry areas, have evolved to be flame resistant. Humidity can make it next to impossible to start a fire, and if it is raining, there is no chance that you will be able to start a fire without the assistance of a fire starter.

Don’t let your spouse spend 21 days naked with a member of the opposite sex. The men and women on Naked and Afraid are mostly young and reasonably attractive. And they are naked. In almost every location, it is necessary for the contestants to “cuddle up” to stay warm at night. Yes, the Discovery Channel cameras are on them during the day, but at nighttime, they are left alone. Just two naked people, huddling close, away from all prying eyes. Given these circumstances, it would not be hard to imagine that sometimes nature would take its course.

On most of the shows, the conditions are so miserable that I highly doubt sex would even cross their minds. With almost every couple, the men and the women do a good job maintaining boundaries and focusing on the task of surviving for the 21-days. For example, when couples need to lie together to stay warm, in 99% of the shows, it is the woman who is spooning the man—for obvious reasons.

But in one case an attractive young wife and mother was paired with a handsome single guy. The man was also a much more accomplished survivalist which led the woman to rely heavily on her partner. There were several times where she praised her partner with body language that said, “oh, my hero!” And when they lay down that evening, she was the one being spooned. I have no clue if anything naughty happened, but the whole thing was damned creepy. My only thought was: what the hell was this woman’s husband thinking when he let his wife sign up to go on this show?

Naked and Afraid turns out to be more than just another exploitation reality show. Watching contestants push their bodies and minds to the limit is both inspiring and educational. And if you watch carefully, there are valuable life lessons to be learned.