This past week, conservative pundit S.E. Cupp went on the attack against Donald Trump. In response, Trump called her a boring, biased loser in a tweet. The incident gave me the idea to look into the whole phenomenon of conservative female pundits.

All of these women are attractive—girls on the right are better looking than the ones on the left—and the far right wing women are the best looking of all. But are the conservative women pundits as good as their male counterparts? Or are they just eye-candy intended to keep conservative gamma males watching and reading? Here’s my run down of some of the most popular conservative pundit babes.

Since Cupp drew Trump’s fire last week, she would be a good pundit to start with.

The first thing to get clear is that S.E. Cupp is a very serious, scholarly pundit. Unlike other female pundits who might use their looks to get ahead, Cupp would never stoop to that level. She has relied on her sharp intellect to get where she is. 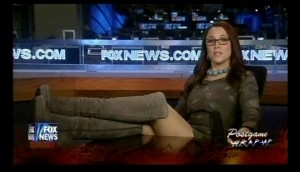 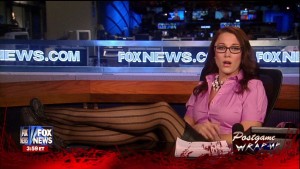 Cupp calls herself a “conservative” but she belongs to the branch of the conservative movement that wants to bring conservatism into the 21st century. What this means in practice is getting rid of social conservatism and keeping support for the free market. In other words, Cupp is not a conservative, but a libertarian.

For example, back in April Cupp wrote the following:

For some time I’ve been quietly (and sometimes not so quietly) telling my conservative friends that while the party can still support traditional views on marriage, it does need to adjust its attitudes… The Republican Party can’t afford to lose all the people in America who want to be both, conservative and supportive of gay marriage. The party needn’t approve of gay marriage. But it must find a way to embrace gay conservatives and conservatives who support them. Our numbers are only going to grow.

Cupp is telling us that one can somehow both support traditional marriage and support gay marriage. This is a wonderful revelation. Taking it to its logical conclusion, I suppose one can also be pro-life and yet embrace pro-abortion conservatives and the conservatives who support them. Their numbers are only going to grow.

Libertarians like Cupp look at the demographics and conclude that the future belongs to them. Young Americans are less socially conservative. Thus, libertarians reason that the way to attract the Millenials is to jettison the social conservatism and focus exclusively on free market principles because we all know that there is nothing sexier than supply and demand curves.

Maybe Millenials will become Republican voters because of the Party’s support for legal weed, unchecked immigration, free trade deals that result in fewer jobs for Americans, and tax breaks for hedge fund managers.

I believe Cupp is wrong. The unchecked immigration that the libertarians favor is bringing in people who want to be Democrats—they want more government benefits, not less.

And the Democrats have already cornered the market on being socially liberal. If the GOP supports gay marriage (as it tacitly does already), Democrats will be championing pedophiles. Trying to decay as fast as the surrounding culture is a losing proposition.

But I think the tide is turning. The future of conservatism is not a race to the bottom. People want to be united by something more than the desire to “buy more stuff.” The future will be more Christian, nationalistic, socially conservative that the “tough guy atheist” libertarians would have us believe.

Bottom line: As usual, Trump is right. Cupp is an overrated pundit with stale ideas and ironic glasses. Her main audience is godless, thirsty gamma males who have read too much Ayn Rand.

There are lots of excellent political commentators out there, but they are preaching to the choir. No matter how much they write or how many TV appearances they make, nothing really changes as a result of their punditry. It’s all sound and fury that signifies nothing.

Coulter is different. It was her book, Adios America, that influenced Donald Trump. Before reading her book, Trump was fairly conventional on immigration policy. It was only after reading Coulter’s book that he decided to make his controversial pledge to build a wall along the US’s southern border. American political discourse has never been the same since.

Yes, Coulter can be offensive at times. That is a deliberate strategy on her part. You can’t make it in her business by being boring.

We can also derive a life lesson from Ann Coulter’s career. The ever-capitulating National Review stopped publishing her column after it deemed that Coulter was offensive to Muslims. Rather than let it crush her, Coulter rose above it to become even more popular that she was before.

Bottom line: Coulter is the most important pundit in the United States. She’s had more influence on the national discourse that all the other pundits, male and female, combined.

Michelle Malkin is another pundit that combines substance with form. Over the years, she has drawn a lot of fire from the unhinged left because she is Asian. Lefties can’t wrap their mind around the idea that a nonwhite women could have conservative ideas.

The great thing about Malkin is that she has challenged the false idea preached by the GOP establishment that corporations are always good. She’s written about how companies have gamed the system to extract benefits for themselves from the government.

Malkin has been critical of US immigration policy for years. In fact, it might be partially chance that Donald Trump ran across Coulter’s book before he ran across Malkin’s writings.

Here latest book, Sold Out: How High-Tech Billionaires & Bipartisan Beltway Crapweasels Are Screwing America’s Best & Brightest Workers, is on my queue of books to read because it details how corporations are using the H1-B visa program to pay lower wages.

Malkin is also inspirational in that she is a successful entrepreneur. She’s started at least two businesses while maintaining her blog, writing op-ed pieces, making television appearances, and raising a family.

Bottom line: Malkin is worth reading because she is willing to do the heavy lifting necessary to go after sacred cows. However, she is a little more conventional that Coulter.

It is really hard to get a handle of where Timpf stands politically from her writing. Most of the pieces are very fluffy and deal with egregious examples of political correctness. Here is a typical sample:

I did not continue reading to find out if Timpf also has “bikini bridge.”

There is nothing wrong with covering SJW silliness. I’ve done quite a bit of it myself on ROK. It makes for an enjoyable read and it drives a good bit of internet traffic. But what I find missing in Timpf’s writing is a willingness to stake out controversial positions.

Yes, she is against the antics of extreme feminists, but Timpf doesn’t ever question feminism itself. Indeed, it seems like Timpf is perfectly happy with the changes that feminism has brought on to date—it is just that she doesn’t see a need for it to go any further.

Milo writes in a provocative style, but what he is saying here is true. The Pill tricks a woman’s body into thinking that it is pregnant. Women who are pregnant are going to be attracted to men who are more nurturing. In other words, a woman on the Pill is more likely to go for a beta male than the alpha that she would naturally be attracted to. A woman who is on the Pill when she selects her husband may find that the beta guy no longer appeals to her once she goes off the Pill, which leads to divorce.

There is nothing conservative about the Pill. It has destroyed the family, and it has directly fostered the environment that has enable same-sex marriage to gain acceptance. If the current push to gain acceptance of pedophilia is successful, that too will be traceable to the acceptance of the Pill. To say you are conservative but not fight against the Pill is to preemptively concede victory to the opposition.

Bottom line: There is not enough information to conclude what Timpf’s real views are, but I suspect that she may fall into same category as S.E. Cupp of “conservatives” who are trying to keep conservatism one step behind whatever the liberals are doing.

Katie Pavlich is one of the up and coming conservative pundits. A survey of her writings reveals to be very conservative in the traditional sense. She appears to be pro-life, opposes illegal immigration, supports gun rights and individual liberty. I couldn’t find any overt opposition to same-sex marriage, but many conservatives did not want to fight that battle as they saw it as a losing proposition.

In the end, Pavlich belongs to that sunny form of conservatism that thinks that the GOP will be able to win over Hispanic voters and Blacks if it runs ethnically diverse candidates like Rubio and if it can “get the message out.”

The GOP has been telling us that it just needs to get its wonderful message out for the past 50 years, so I am skeptical. Only time will tell if Trump’s bolder, more unapologetic approach will win the day over Pavlich’s mainstream conservatism.

Bottom line: Pavlich is a very solid, mainstream conservative, but that is as far as it goes. I’d like to see her dig deeper and question the foundations of the conservative movement.

Another up and coming conservative female pundit is Katie McHugh who writes for Breitbart. McHugh has not been writing for very long but from what I have read so far, she is fearless. She is not afraid to report on unpleasant truths, and she is willing to question the received orthodoxy.

Earlier this year McHugh was temporarily banned from Twitter for saying that it was the English settlers, not Native Americans, who built the United States. Simple truths, if stated provocatively, are not welcome in today’s society.

Bottom line: McHugh is a pundit to watch. I hope she keeps her edge.

The conservative female pundits are much more than eye-candy for conservative nerds even though they are not shy about leveraging their looks. Like the male pundits, they are all over the conservative spectrum politically. I only read  Coulter, Malkin, and McHugh on a regular basis because their commitment to smashing political correctness and slaying sacred cows.