Are you a producer or a consumer? The answer to that question will determine whether you will lose ground in the current economy or whether you will flourish financially. Fortunately, the difference between the two of them is only a change in mindset.

The harsh reality of the current economy

The media paints a rosy picture of our economy. We are told that President Obama’s brilliant economic policies have successfully lifted us out of the 2007-2008 recession. Unless you happen to work in one of the recession proof corridors such as New York or Washington, DC, you know that this is not true. The recovery has enriched the wealthy but has done little to help ordinary Americans.

What’s the real unemployment rate? It is probably around 20%. And this does not take into account all the people who are under employed. Many people have taken part time jobs or jobs that pay much less than they were earning before. These people are technically employed, but are achieving much less than they could.

Many young people graduating from college despair of ever getting a career-level job. Some are opting to abandon their nearly worthless college degree to take up a trade.

If you have a high paying job, don’t rest on your laurels. The US government has plans to dramatically increase the amount of skilled immigrants. Even highly technical workers may be endangered. For example, Disney recently forced American workers to train their own H1B immigrant replacements before firing them.

The bottom line is that if you stick with a traditional consumer mindset in this economy, you will find yourself either unemployed or underemployed.

What is a consumer? 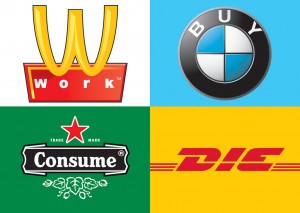 The consumer mindset is the default mindset for most Americans and Europeans. The basic idea is that you follow the standard path through life. The path often involves getting good grades at college, finding a good job, and contributing to a 401k in the hopes of retiring one day.

People on the standard path trade their labor in exchange for money—usually in the form of a salary. They work 40 hours and they get paid for 40 hours. If they stop working, they stop getting paid. This even applies to high income professionals such as doctors or lawyers.

The reward for obediently following the standard path is that you can buy lots of stuff—you can be a consumer.

The entire system is geared to getting you to follow the standard path—to being a consumer. If you are an employee, you will find it easier to get a loan and you will have access to better medical insurance.

By being a good consumer, you shackle yourself to the system. You feel good leasing that BMW 5, but it simply means that you will be a committed corporate drone for the next few years. Being a consumer makes you a part of the Matrix.

What is a producer?

A producer follows a different path. Rather than exchanging his labor for money, the producer seeks to build systems that will multiply the rate of return on his time. Becoming a producer is the best way of achieving financial independence.

Producers are almost always business owners rather than employees. For example, owners of a chain of dry cleaning stores are producers. Their rate of return is a multiple of the amount of time they put in to their business. And if they have put in trustworthy management, the owners will be able to leave their stores for a period of time without seeing a drop in income.

Hollywood actors are producers too, even though they are employees. This is because of the royalties they earn. They get paid for making the movie but then earn extra royalties whenever the movie is sold in the future. A software developer who works for a company but shares in the royalties is also a producer.

The elites of the current age are all producers in one form or another.

I don’t believe most of my readers want to be one of the elites of the current age. But if you want to be able to adequately provide for your family, becoming a producer is your only option.

There is one more distinction: not only must you figure out a way to not exchange your time for money, you also must hold on to what you have.

Wise producers know that the time for earning can be short. These producers save and invest so that if winter comes in the form of recession, depression, or simply being out of style, they can make it through.

Foolish producers spend everything they earn and maybe even more. I think of rapper Kanye West who, according to Forbes, earns $72 million per year. Yet West went on Twitter to say that he was over $50 million in debt. Suffice it is say, foolish producers are mistaken when they think that the gravy train will continue forever. When hardships come, they will be wiped out.

How to become a producer

This shift in thought will produce two changes in your life. The first will be that you will view purchases differently. Instead of conspicuous consumption, you will view them as items that reduce your net worth. That doesn’t mean that you subject your family to monastic austerity—only that you will make purchases after more deliberation.

The second change is that you will begin to think of opportunities for becoming a producer. 99% of the ideas that come to you will not be feasible. Perhaps they would require too much upfront investment. Or they may require a talent that you don’t have. That’s okay because you only need one successful idea—or a number of less successful ideas.

For example, you might have an idea for a product. When you start designing your product, you have to answer questions like how you will produce a prototype, who will manufacture the product, and how the product will be marketed. As you answer these questions, you learn more about the process. Even if your first product idea turns out to be a dud, the knowledge you have gained is invaluable. It will prove to be the springboard to later success.