How big of a role does IQ play in one’s success in life? There are two opinions: One says that IQ is only a construct created by standardized tests. It might measure something, but whatever it does measure is mostly useless. The other opinion is that IQ measures intelligence and is thus a good indicator for success in life. They even go so far as to say that a high IQ cognitive elite should govern us. Which side is right?

Before we answer that question, it helps to have a little background on IQ. IQ stands for Intelligence Quotient. A German psychologist coined the term back in 1912 to describe the scoring of intelligence tests.

Psychologists noticed that children’s grades were correlated across unrelated subjects: children who did well in math also tended to do well in reading. This led them to speculate that there was some type of general mental ability that was underlying a child’s ability to understand the various subjects. This ability was called g for “general factor.”

IQ tests were then designed to measure for g.

Is IQ a Useful Measure?

IQ is a very useful measure, especially for academic and job performance. If you have a higher IQ, you’ll likely do better in school and at work. In fact, companies used to administer IQ tests to potential employees to see if they could handle the work. They had to cease the practice because it was found that using IQ scores was having a disparate racial impact.

To get around not being able to use IQ tests to screen employees, companies began relying on proxies. The most common proxy is a college education. Colleges screen their students so that low IQ students are usually not admitted. Exclusive universities like the Ivies admit only very high IQ students (with some notable exceptions). Thus, graduates from these institutions are in very high demand as it indicates that they are intelligent.

Low IQ is also correlated to higher crime rates. People who have an IQ between 70 and 90 commit crimes at higher rates. This is probably because people with IQs below 90 are not smart enough to think through all the ramifications of their actions.

If IQ is so strongly correlated to academic and work success, why don’t we make more use of it? 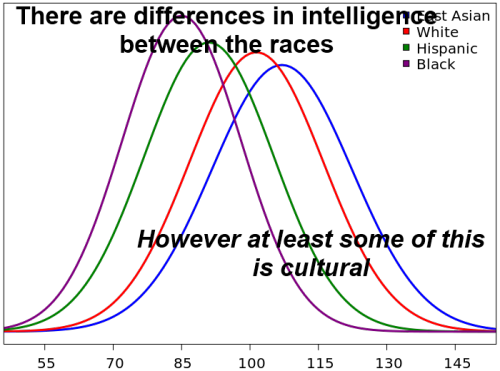 The Human BioDiversity (HBD) movement suggests that we should take these differences into account in public policy. For example, some students of HBD believe that IQ should be considered when crafting immigration policy.

Some scientists reject the idea that IQ should be used in policy. They believe that IQ may be the result of other factors such as the environment that people are raised in. While their ideas may have merit, I should point out that blacks who are adopted into white homes have IQs equivalent to blacks raised in black families.

Because of the uncomfortable racial stigma that is associated with IQ, the public has been conditioned to think that IQ is dubious concept.

Since IQ can play such a large role in a person’s success, it would be a good idea to try to increase one’s IQ. The bad news is that IQ seems rather inflexible. You might be able to increase your IQ slightly through playing dual n-back games, but it is a difficult, time-consuming process.

So does that mean the HBD people are right? Are people with lower IQs doomed to lives of mediocrity? And should we be governed by a cognitive elite?

I believe that although IQ is important, it is not the sole determinant of success. Donald Trump has pointed out in his book Think Big and Kick Ass in Business and Life that there is something that is more important to success than IQ—the drive to achieve.

Trump (whose IQ is estimated to be around 160) writes how some of his brilliant Wharton classmates achieved only moderate success while people with much lower IQs became astonishingly successful. Trump says that people who succeed possess several traits that are not found in others:

Persistance. They never give up, but keep on pushing until they win.

Enjoyment. People who succeed love what they do. Trump says that he could never be a success at something like Information Technology because he has no interest in the field.

Energy. To become a success at anything requires lots of energy. You’ve got to put in the time to be able to beat the others. Trump himself sleeps only a few hours every night. He writes that he loves what he does so much that he cannot wait to get up and start work.

To Trump’s list, I will add one more and that is people skills. During my career I’ve watched lots of people who may not have been the sharpest knives in the drawer become wildly successful because they possess good social skills.

The best example of this is a criminal defense attorney that I know. If you wanted someone to represent you before an appellate court on some fine legal point, this attorney would not be a good bet. He is a lousy researcher and a terrible legal writer. Yet, for a jury trial, he would outperform the finest Harvard attorneys because he possesses such charisma before juries.

I’ve also known some people who score high on an IQ test but whose lack of social skills and empathy would make them a disaster if they were asked to govern others. The idea of a cognitive elite that some of devotees of neo-reaction posit is, therefore, not a good one. Better to be governed by normal people than socially inept nerds.

IQ is important, but it is not everything.

If you want to be successful, the ideal combination is to have a high IQ, strong drive, and excellent social skills.

But, if you are not intellectually gifted, don’t feel bad. You can still achieve awesome results. Don’t worry about improving your IQ. Instead, work on improving your drive.

If you are lucky enough to have a high IQ, don’t get comfortable. You will never achieve your full potential unless you marry your intelligence to a strong work ethic and great people skills.