The internet is full of people who are complaining about the state of our culture. Children are being born out of wedlock at record rates and are being raised by day care centers. Politicians have successfully divided the populace and focused our attention on ephemeral issues. Women are encouraged to go against their natural inclinations and behave like tramps. The media continually pushes out a stream of rubbish that is intended to further debase our culture.

But I get tired of complaining. What can we do to fix our culture?

The enemy is progressive philosophy. Progressive philosophy states that man is perfectible. The problem with man is not that he is fallen due to original sin, but the traditional institutions: the king, the family, and the church. Get rid of these institutions, and we’ll have a utopia. The family is patriarchal and oppressive. Liberate women from reproduction. Liberate women from their husbands. That is true freedom.

Get rid of the church with its oppressive rules. Or better yet, turn the church into another institution that preaches progressive philosophy. That is exactly the project that progressives within the Catholic Church have been trying to achieve since the Second Vatican Council. The same thing has been happening to the Protestant churches.

A recent example of this is when progressives threatened to burn down the pizza restaurant in Indiana when the owner said hypothetically that he would not cater a gay wedding. Frankly, it is just monstrous to threaten your fellow citizens with violence just because they don’t agree with your political agenda, but the devotees of the church of progress see this as their religious duty.

Progressive philosophy has been gradually unfolding within Western culture for at least 500 years. Astute readers will note that this makes it unlikely that it is any one group of people who are responsible for progressive philosophy. Rather, it has a spiritual source.

The concept of the “red pill” designates waking up the illusion that is progressive philosophy. There are degrees within the red pill. Some men take the red pill in understanding the sexual marketplace, but this is only one level of the red pill, and it is the lowest level.

Educating yourself means lots of reading, especially of classical sources. It is easy to get absorbed in the latest political squabbles, but by doing so we will lose perspective. If readers are interested, I will construct a reading list for a future post.

The two areas to focus on are how a traditional society should work and how progressives spread their ideas. We’ll need to understand both of these items if we are to have any hope of rolling back the tide.

The proper response here is to say, “If you have no other argument than to accuse me of being a racist/sexist/homophobe, you must not be able to counter my point,” and walk away. And don’t even bother responding to their accusations. It doesn’t matter what they think.

Republican candidate Rand Paul recently did a marvelous job of demonstrating how we should not play according to progressive rules. When asked to state his position on abortion, he turned the question around on the reporter:

When quizzed about his views on abortion, Republican Kentucky Senator Rand Paul avoided the gotcha game and told NH1 reporter Paul Steinhauser to ask DNC head Debbie Wasserman Schultz if it was okay to “kill a 7-pound baby in the uterus.”

“Why don’t we ask the DNC: Is it okay to kill a 7 pound baby in the uterus?” Paul reportedly said. ”You go back and you ask Debbie Wasserman Schultz if she’s okay with killing a seven pound baby that is not born yet. Ask her when life begins, and you ask Debbie when it’s okay to protect life. When you get an answer from Debbie, get back to me.”

I am not endorsing Rand Paul as a candidate, but I do admire that he had the balls to go on the offensive.

Progressives stick together. If one is in trouble, they will circle the wagons to defend their comrade. Yes, there are occasions when they will throw their comrade under the bus if it serves a much greater purpose, but the norm is protect each other. The best recent example of this is the Rolling Stone University of Virginia rape hoax. Even though Rolling Stone violated the most basic values of journalistic integrity, no one has lost their job over this fiasco.

Imitate the progressives. Find people in your community, real or virtual, that share your values. Spend time with them. If they are attacked or stumble, stick by them. If they lose their job, do your best to help them find another one. Support their businesses.

We gradually need to develop a brotherhood—men who can depend on each other.

Getting married, having children, and properly educating those children is the most countercultural thing we can do. Have lots of children and work hard to ensure that they are not indoctrinated into progressive philosophy. Yes, it is a sacrifice, but our task calls for heroism.

I love this quote from Cardinal Burke. It really says all that needs to be said. 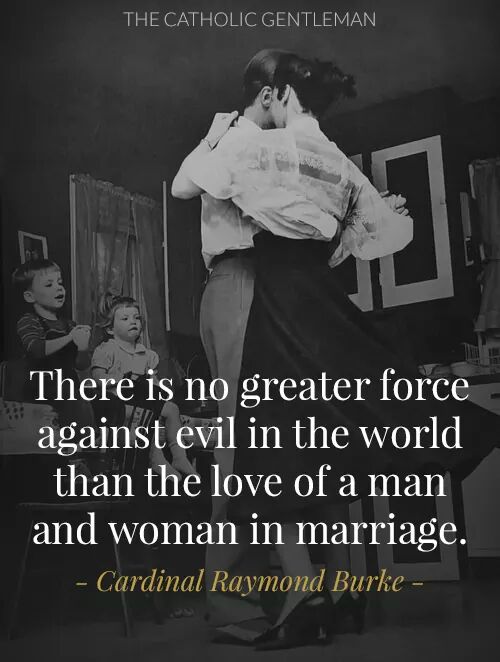 Yes, the forces arrayed against us are vast, but we will be triumphant in the end.

Enjoy life and be happy. Spend time with family and friends. We are warriors but we are happy warriors. Our approach should be that of G.K. Chesterton who, “like some slightly daft medieval knight galloped directly into the enemy encampment and, with a laugh, threw down the gauntlet.”

St. Paul wrote: “For we wrestle not against flesh and blood, but against principalities, against powers, against the rulers of the darkness of this world, against spiritual wickedness in high places.”

The only way we will win this battle is if we make use of all the means available, and that includes the spiritual means.

This is obviously a very preliminary sketch of the upcoming battle, but it is a beginning.