I recently saw a conversation on Twitter about whether or not husbands and wives are equal. It is a fair question. The consensus of the modern world is that men and women are completely equal with the exception of different sex organs. Thus, moderns conclude that there are no set roles in a marriage. But is that really the case?

Gender Roles in the Western Tradition

I want to clear up one point. One person on Twitter argued that the headship of a husband in marriage was something foreign to the Western tradition. His argument was that the idea of the husband being the head of the wife came from Semitic influences—namely Christianity.

In the mind of this person, the concept of a wife being submissive to her husband was something more compatible with Islam than pagan Europe. Modern egalitarianism is therefore a return to what Europeans had prior to the rise of Christianity.

There are a few mistakes in his reasoning.

The Testimony of History

First, Christianity is not some foreign imposition upon Europe. Rather, Europe is the result of Christianity appropriating those elements of pagan culture which are true, and raising and transforming them. Without Christianity there would be no Europe as we know it.

The creation of chivalry is an example of this. The fusion of the Germanic warrior tradition with Christianity gave rise to an institution that quickens the pulse of every true man and woman to this day.

The second mistake is that it does not take all of European history into account. The Greeks and Romans were patriarchal societies. This is best illustrated by the Roman institution of pater familias. What this meant was that the oldest male in the household had complete control of the rest of family. Definitely a far cry from modern equality!

With the Germanic tribes we have less information, but they were patriarchal as well, although less so than the Romans. Women had no political station of their own. They either inherited their station from their father or their husband. On the other hand, Tacitus writes that a wife comes to her husband,

As a partner in toils and dangers; to suffer and to dare equally with him, in peace and in war.

This is not modern egalitarianism. Rather, it approaches the idea of Christian marriage. 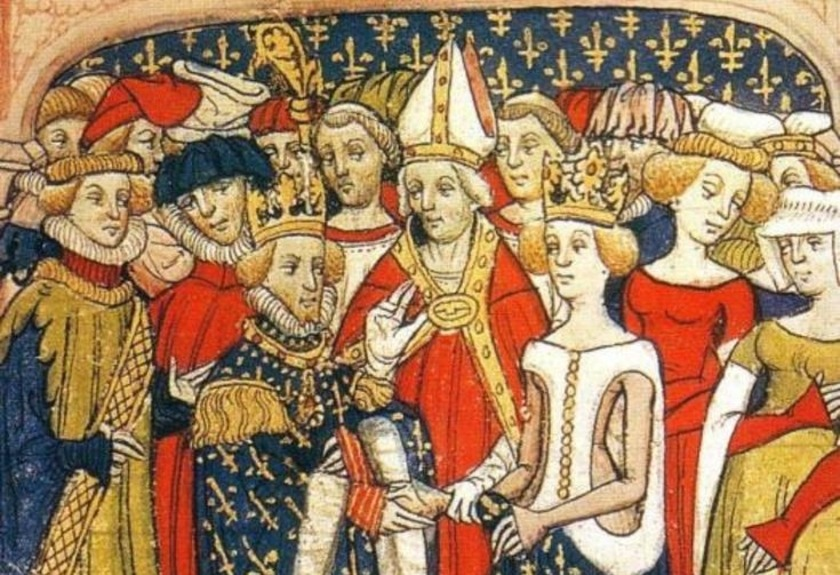 Unfortunately, the full teaching about Christian marriage flies directly contrary to modern society. Pastors and priests are either too lazy or too afraid to teach it so it is little known among the faithful. The sticking point is St. Paul’s admonition in Ephesians 5:22-23.

We have to be clear that this not the leadership that we envision in the secular world. Biblical headship does not involve the wife being treated like an employee or a child. Instead, Christian leadership must always be Christ-like: it must be servant leadership.

There are some conditions on husband’s leadership role:

Finally, this needs to be put in the context of what Paul says afterward: “husbands should love their wives as they do their own bodies.” (Eph. 5:27)

Where does egalitarianism come from?

If modern egalitarianism does not come from the European tradition, where does it come from?

It actually has its roots in the Enlightenment. But the equality of the Enlightenment was mostly focused on eliminating monarchy and aristocracy. It left the patriarchal relationship between husband and wife intact—for a period of time.

The real thrust for equality within marriage came with Marxism. Marxism continued to take Enlightenment doctrine to its logical conclusion and it leveled all inequality, including that between husbands and wives.

According to Marxist teaching, the whole institution of marriage is inherently oppressive to women and needs to be done away with. Frederich Engels wrote:

The modern individual family is founded on the open or concealed domestic slavery of the wife, and modern society is a mass composed of these individual families as its molecules.

While the US and Europe (with the exception of the Eastern Bloc countries) never adopted Marxism directly, its radical egalitarian concepts were introduced into the West through the work of feminists and other cultural revolutionaries. If you look into the lives of the feminists of the 60s and 70s you will find that they were all deeply influenced by Marxist thought.

By the way, these people have not gone away. Radical feminists are continuing their crusade. The egalitarianism of today is just a stepping stone to their ultimate plan which is doing away with marriage entirely.

In summary, patriarchy, not equality, is the ancient European tradition. It does not originate in Christianity, but Christianity put the roles of husband and wife into their proper order.

The spiritual headship of husbands and the submissiveness of wives does not have a good analog in the world. We need to study the example of the life of Christ to understand how it should be lived.