All guys like to think of themselves as a James Bond-type character: handsome, smooth, dangerous, and always under control. I am no different, but I fall far from the suave secret agent ideal. One good example of this was my first date with the woman who would later become my wife. Somehow I got a second chance even though my poor planning almost caused me to urinate in public.

How I met my wife

I had met my wife one week before in a jazz club in a large US metropolis. She was a friend of my brother’s fiancé. By the time I arrived, another guy was already hitting on her.

I am not typically that bold, but as soon I laid eyes on my future wife, I said to myself, “There’s no way in hell I am letting this one get away,” and promptly sat down next to her and started chatting her up much to the dismay of my rival.

It was a good move. It turns out he was flaming out pretty badly. But I give him credit: he didn’t budge for a good 30 minutes after I arrived. He desperately tried not to yield ground, but when it comes to love, the girl gets to make her choice, so he eventually had to retreat. Future wife and I chatted the rest of the evening, ignoring everyone else.

At the end of the night, I made a critical error—I didn’t get future wife’s digits. I was forced to get them through my brother’s fiancé who gave me the run around for several days. Thanks to my incessant nagging, she finally relented.

The day after I met future wife I had this conversation with my friend who had been my wingman the night before:

Wingman: “The really cute young one?”

Wingman: “You are insane. You have no chance.”

Needless to say, I didn’t let my friend’s judgment dissuade me. I called future wife by Wednesday and set up brunch for the following Sunday morning.

Our first date started out badly from the very beginning. I underestimated the amount of time it would take to get to future wife’s house so I probably would have been a few minutes late even if everything went well. It didn’t.

I got lost on the way to her house. This was in the days prior to ubiquitous smartphones and I had neglected to bring the GPS or her phone number so I had no way to call her to tell her about the delay.

I finally got to her house 45 minutes late. I think in most cases, this would have ended my chances, but future wife was a good sport and gave me a break. 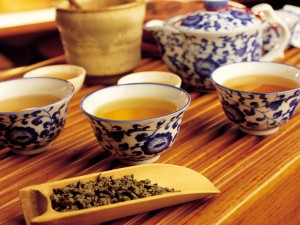 For brunch I wanted to show future wife what a hip, cool guy I was so I took her to a trendy restaurant in the city that had recently opened. Our conversation went really smoothly. We found out that we had a lot of things in common, but more importantly, we had a similar view of the world.

But during this time I made another critical error.

One of the gimmicks of this restaurant is that they had a broad selection of Chinese, English, Arabic, and Japanese teas. Again, to prove what an amazingly cultured guy I was, I ordered a full pot of some exotic, overpriced Chinese tea.

Future wife was wise. She had a small cup or two of tea. I gulped down the rest of the pot. This was a big mistake.

On the way home

After brunch, we wandered around this hip area of the city, exploring the quirky shops and used bookstores before getting back into my car for the journey back home.

The parade had blocked off a good bit of the city, and even though it was a Sunday, traffic was snarled up really badly. We reached a point where we were at almost a complete standstill.

After sitting in traffic for a long time, my poor decision to drink a giant pot of tea came back to haunt me—I needed to pee—badly.

As fate would have it, at that point we were stuck at a business section of town where all of the little fast food joints were closed so there was no way just to pop out for a quick nature break.

The longer I sat in traffic, the more desperate my situation became. My discomfort had become intense. It was so bad that I started contemplating getting out of the car and urinating on a lamppost or a fire hydrant. There was no alley or tree to hide behind. I pictured myself being arrested for indecency and hauled off to jail in front of this really cute girl.

But I held on and I was glad that I did because I finally saw looming in the distance like a mirage in the desert—a Starbucks.

I consider Starbucks an enemy of the human race, but I owe them a debt in this case. Much to her amusement, I explained my predicament to future wife and asked her to take the wheel while I dashed into the coffee shop to petition the barista for the keys to the bathroom.

While I was embarrassed by my brush with incontinence, I was weirdly unfazed. When I got back into the car, I apologized out of politeness, but I wasn’t really sorry about it. I had this incredible, irrational confidence that it would not be the last date that I had with this girl. Obviously I was right.

Before I wrote this article I asked my wife, “why did you still go out with me after that fiasco of a first date?” My hope was that she was going to say that it was because I was so dashing and debonair. To my dismay, that’s not what she said.

My wife said I was a little awkward on the date (true, I guess) but that we had a lot in common (true again), and that I reminded her a little of this actor.

I am not sure if that is a good thing or a bad thing. I was hoping more for a young Sean Connery look. The last factor she added was, “And you looked really handsome.” That made me feel good.

You’ll read a lot on the internet about technique when it comes to romance. It is all about having the “right” attitude and doing the “right” things. It is not bad advice, and I don’t blame anyone for trying to maximize his or her outcomes at love.

Still, as I look back on my life I realize that there is more to life than just our own efforts. There is an element of providence, or destiny if you prefer, that guides us. The modern world with its “scientific” mindset tells us that everything can be reduced to a formula. But I believe that when it comes to matters of love, there is more than just a little bit of magic at work.